Gender Balance and Diversity in Engineering 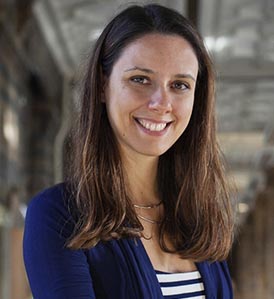 Zita Martins is an Astrobiologist, an Associate Professor at Instituto Superior Técnico (IST, Portugal), and the Co-Director of the MIT-Portugal Program.

She works in the field of Astrobiology and Cosmochemistry.

She has a 5-year undergraduate degree (Licenciatura) in Chemistry from IST (2002) and a PhD in Astrobiology from Leiden University (The Netherlands, 2007).

She was an Invited Scientist at NASA Goddard (2005 and 2006), and an Invited Professor at the University of Nice-Sophia Antipolis (France) (2012).

She has an active involvement with public outreach activities, including more than 100 international media interviews, and public talks at museums and Science festivals. She had the honour of having her portrait sketched (special commission) for the Royal Society exhibit about successful women in science.

She was selected by the BBC as an Expert Women Scientist, and as one of “100 Women in Science” by the Portuguese Agency of Science and Technology “Ciência Viva”.

In 2018 she received a Barbie Award 2018 on the International Girl Child Day for being an inspiration to girls.